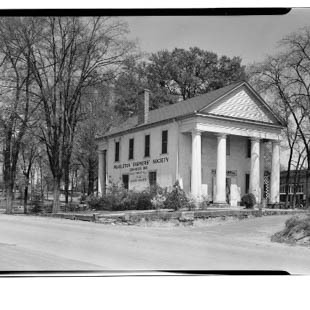 Twenty-nine prominent men of Pendleton founded the Pendleton Farmer's Society in 1815. Thomas Pinckney, Jr., was its first president. There were other organizations before this, but these men finished building the first permanent farmer's society hall in the United States in 1828. The Society had bought the unfinished new courthouse whose construction was halted when Pendleton District was divided into Anderson and Pickens counties. The building is a handsome two-story structure of Greek revival architecture with four massive two-story white columns on two sides. It is well preserved and is still used.