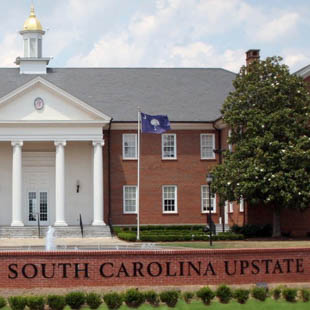 The history of the University of South Carolina Upstate is a chronicle of remarkable development. When Spartanburg General Hospital announced it was phasing out its diploma program for registered nurses in 1967, a citizens' committee requested that Spartanburg be included in the University of South Carolina system to avert a serious healthcare problem.The Spartanburg Regional Campus, as it was first known, opened its doors in the fall of 1967 to 177 students on the first floor of the Spartanburg General Hospital nursing residence. Enrollment continued to increase, which resulted in the school becoming a four-year university in 1975. In 1994, the University began offering graduate degrees. Today's thriving campus boasts 328 acres and an enrollment of 5,300 students.