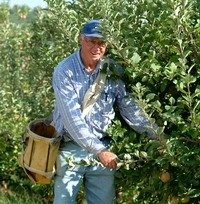 A short history of Apples in Oconee County

Ask people in Upcountry South Carolina where they go in the fall to pick up fresh apples, and more than likely most of them will not mention South Carolina. Though fruit stands selling apples can be found in abundance along the highways of the foothills, many drivers barrel past them on their way to North Carolina.

It wasn’t always like this. At one time, many apple growers in the Upstate—in Oconee County, for example—belonged to a co-op, and the South Carolina Apple Fair, still held in Westminster during the first two weeks of September, used to recognize the grower of the year. Even Groucho Marx was a co-owner of Horseshoe Lake Farm in Long Creek (part of which is now known as Chattooga Belle Farm). But as more Upstate growers got out of the business, the co-op broke up, and now growers in the Upcountry—whose orchards can be located pretty far from major scenic highways—pretty much fend for themselves.

Richard and Lynn Carver, owners of Carver Orchards in Mountain Rest, are one such example. A two-time winner of Westminster Fair’s apple grower of the year, Richard began growing apple trees in 1967, buying the plants from his uncle and working part-time to pay him off. Though only 14 at the time, he wasn’t setting a precedent. The scent of apples he followed could be traced back to his maternal great grandfather, a Matheson, who started the apple industry in Long Creek and has a highway named after him there.

Until recently, the only way to buy apples from Carver Orchards was to go directly to the orchard itself, tucked away across from the Belmont Baptist Church on Whetstone Road. The locals still go there, but recently the Carvers opened up a small stand on the corner where Whetsone Road meets Highway 28, and they have built a larger stand there with refrigeration, which should allow them to sell apples from their 25-acre orchard far into the fall. They begin in July, with Galas, then Golden Delicious, Granny Smith, Rome Beauty, Pink Fuji, Mutsu and Arkansas Black. They’ll close the stand when the apples run out and consumers are forced to return again to buying last year’s gassed apples from Washington in supermarkets.

The only apple native to North America is the wild American Crab. Unlike wild apples, orchard apples, grown from grafts and not from seed, rely heavily on the few varieties that contain the sweetness and texture that people seek, and as a result their relatively shallow genetic pool makes them susceptible to the vast army of insects who evolve and find ways to eat them before we do. This is why the large, sweet, showroom apples we’ve learned to love are impossible to grow without the use of pesticides, requiring more than any other food crop, as Michael Pollan points out in his bestselling book, The Botany of Desire.

This is where Richard Carver’s other job comes in, the full time one that helps him sustain his apple business: he’s an agricultural chemical salesman. Yet it’s precisely this training that helps him use the right pesticides in the least amount at the right time—the kind of knowledge that even older agrigrowers in the Upcountry come to him seeking. And even though he doesn’t yet grow for national companies, he follows the same protocols that the most demanding buyers, such as Gerber Baby Foods, require.

The Carvers are quick to point out that they aren’t the only family with a history of growing apples in the Long Creek area of the Upcountry. Marvin and Gail Bryson of Bryson’s U-Pick and Doug Hollifield of Hollifield’s Orchard are both located off of Highway 76 in Long Creek, and other growers, such as Stanley Brewer of Blue Haven Orchards, along with Bill Butts, Ted Matheson and Mike Ables, all help the Upcountry offer a bounty of local-grown apples.

Not too long ago, orchards, a mark of civilized cultivation, were a part of almost every settler’s land. Some land-grant territories in their property deeds actually required them by law.

Before the end of the 19th century, apples provided the main source for two essential ingredients in our diet: sugar and alcohol. That’s why most of them went straight to the cider heap.

Now that apple growers focus on growing apples for eating instead of drinking, it’s good to know that the intoxicating sweetness that first drew us to the forbidden fruit can still be found on a branch not too far from home.

By Wayne Cox, reprinted with permission by Edible Upcountry Anderson, SC Farm Voted One of the Best Corn Mazes in U.S.